11 Dramatic Lookouts in the Blue Mountains You Must See

The Blue Mountains is a popular getaway for Sydney siders and a travel destination for visitors.

Some viewpoints are easy to get to, whereas others require some walking. Some are famous, and others are away from the crowds.

Looking for lookouts in the Blue Mountains that will take your breath away?

Check out the favourites I have listed below. 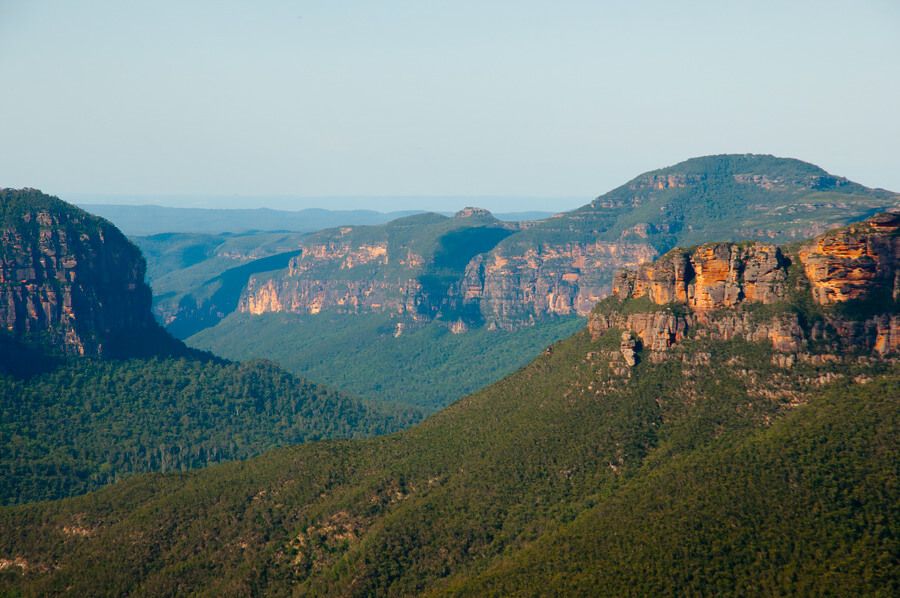 Govetts Leap lookout is one of the best lookouts in the Blue Mountains.

The views are as spectacular as at Echo Point but without the large crowds.

You can even walk to Bridal Veil Falls.

To get there, drive to the end of Govetts Leap Road in Blackheath, or take the train to Blackheath Station and walk 3 km to the lookout. 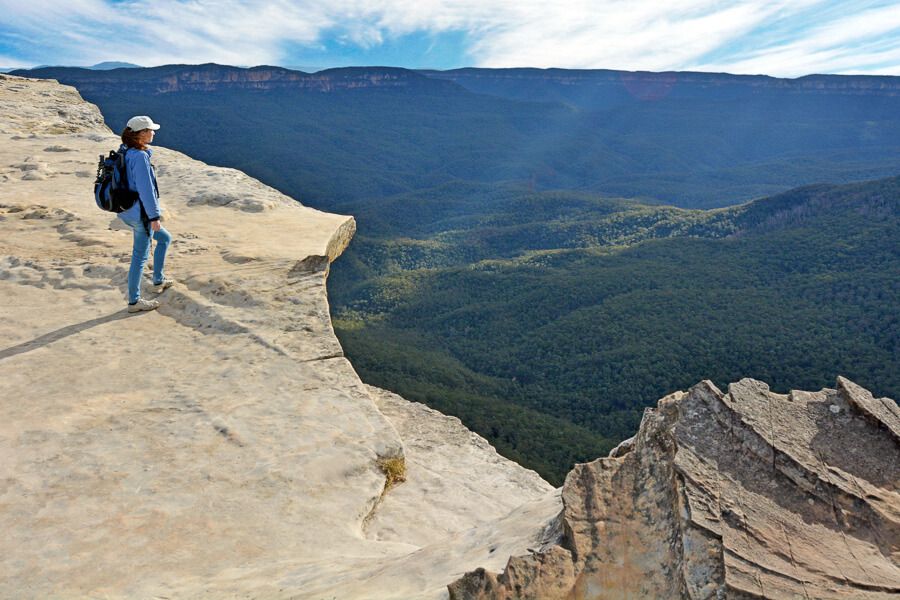 Lincoln's Rock is a large flat rock that offers sweeping views over the valley and mountains. You'll be literally standing on the cliff's edge – a thrilling experience!

Go at sunset for the best outlook and take the most stunning photos.

There are also cool caves near the lookout you can explore.

Be careful with children because the rock is not fenced off. 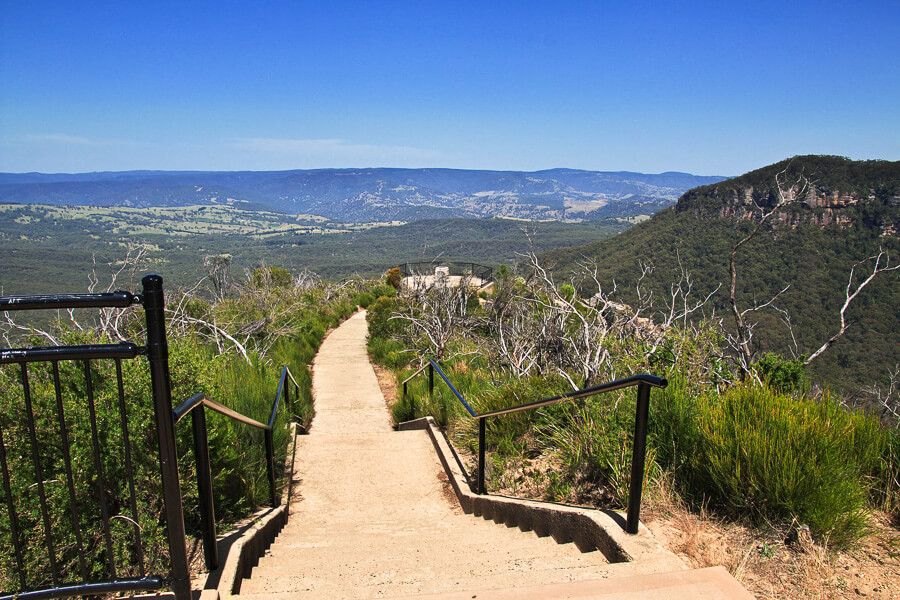 Cahill's lookout offers impressive views of the massive Megalong Valley and Narrow Neck Plateau. You can spot Boar's Head Rock from the viewpoint – a unique rock formation that looks exactly like a pig head.

Cahill's lookout is located in the heart of the Blue Mountains, yet away from the crowds.

It's one of the best places to watch the sunset.

To get there, head to the Western side of Cliff Drive in Katoomba near corner Essendene Avenue. Plenty of parking spots is available. Cahill's lookout is an easy 10-minute walk from the carpark. 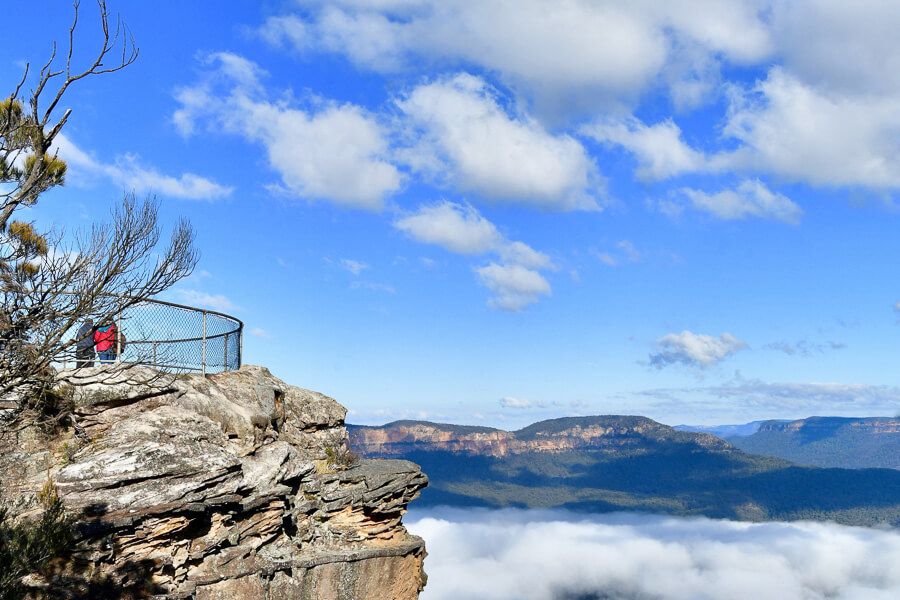 The lookout is perched high on the edge of a cliff. You'll see far across the valley and feel like you're on top of the world. It's no doubt one of the best viewpoints in the Blue Mountains.

It doesn’t get too crowded, and there are picnic tables on the path leading to the lookout.

To get there, follow Sublime Point Road in Leura to the end. The lookout is a short and easy walk from the carpark. 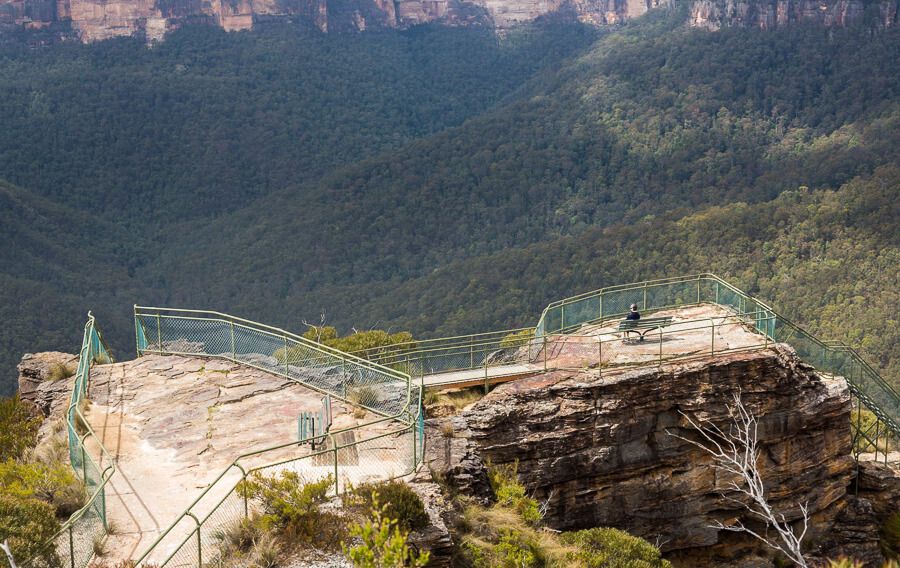 Pulpit Rock lookout is nothing short of spectacular. The views over the Grose Valley are incredible.

Three lookouts linked by stairs and railings sit on three different levels. Standing on this raised rock platform is thrilling. I dare you to walk down to the last floor on the edge of the cliff!

If you feel like bush walking, a track leads to the stunning Govetts Leap lookout.

Getting there: To get there, turn onto Hat Hill Rd from Great Western Hwy in Blackheath and follow the signs to Pulpit Rock lookout. The lookout is 400 metres from the carpark. 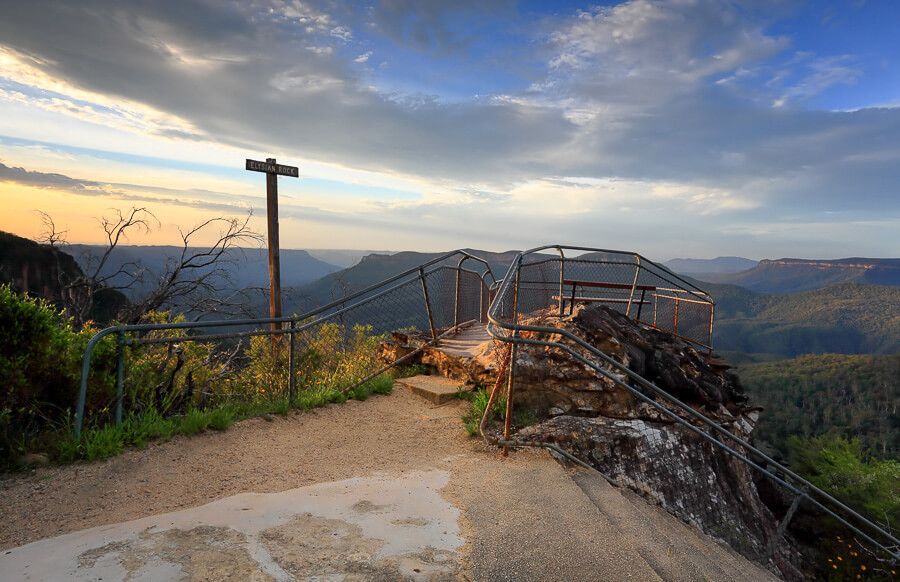 Two fenced lookouts joined by a bridge sit high on the cliff edge. You can sit on a bench to admire the vista.

If you feel like bushwalking, Elysian Rock lookout sits along the popular Prince Henry Cliff Walk.  And it's situated a 5-min drive to Everglades House & Gardens.

To get there, park on Olympic Pde opposite Balmoral Rd in Leura and follow the moderate but short track to the lookout. It's also accessible via the hop on hop off Blue Mountains Explorer Bus. 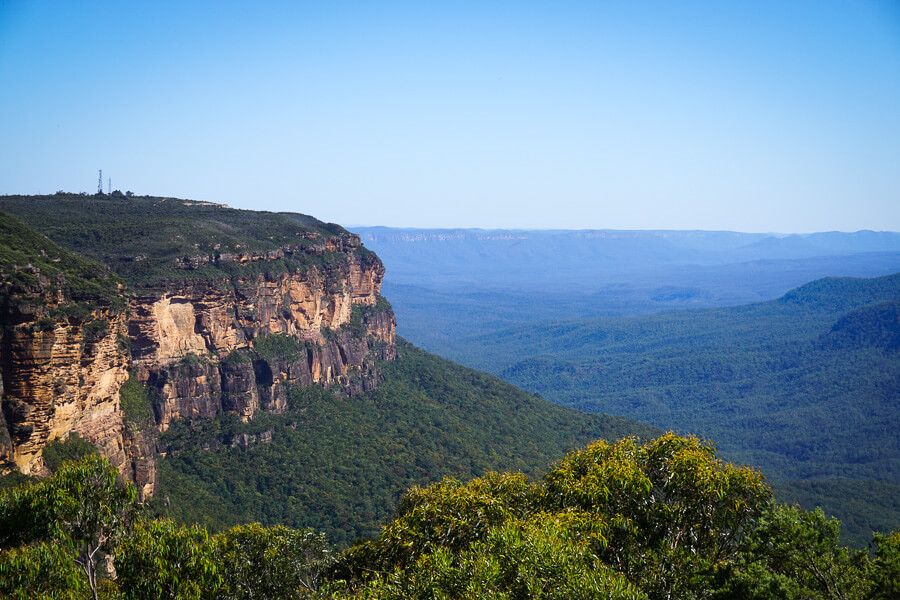 Jamison lookout is an accessible and wheelchair friendly viewpoint. It sits next to a small carpark, and you can sit on the bench seat.

Enjoy the expansive views over the Jamison Valley and Mount Solitary.

It's also an excellent spot for a picnic – you'll find picnic tables and barbeque facilities opposite the lookout. And if you feel like walking, several tracks are located here, including the Wentworth Falls walk and National Pass.

To get there, turn onto Falls Rd from Great Western Hwy and follow to the end, at Wentworth Falls Picnic Area. 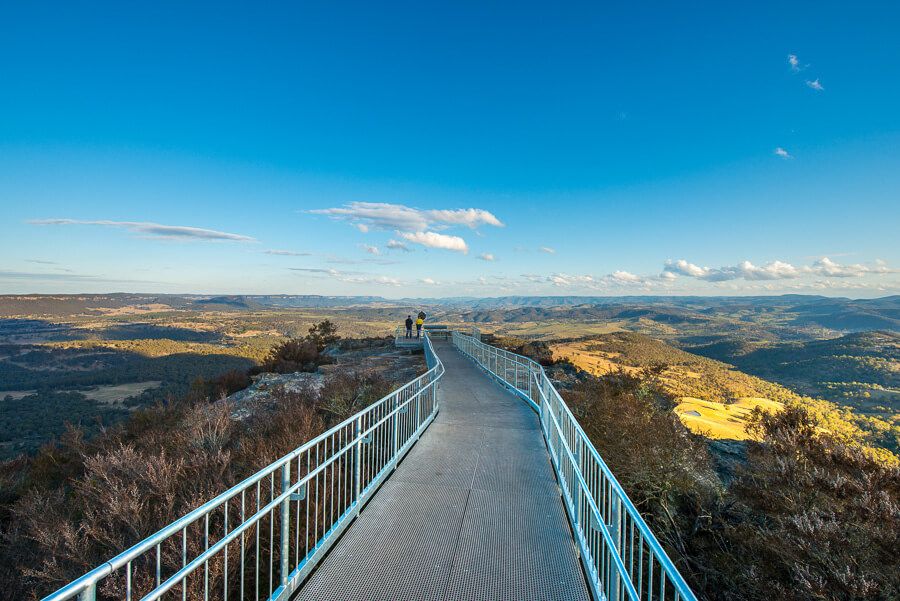 it's worth taking the short drive from Lithgow to Hassans Walls if you're in the town.

At 1,100 metres above sea level, Hassans Walls is the highest lookout in the Blue Mountains. You'll see magnificent views of the valley below and escarpments.

And don't miss the short walking track that leads to the small cave for a great outlook of the rock wall.

To get there, follow Hassans Walls Road in Lithgow to the lookout. The road is unsealed and rough – better go with a 4WD. There’s a parking area. 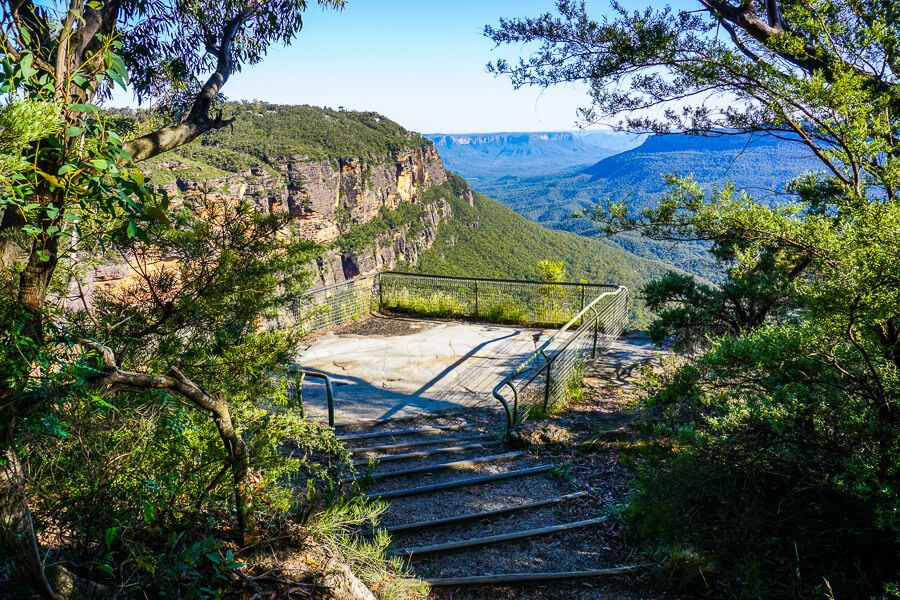 Take a leisurely downhill stroll to Gordon Falls Lookout in Leura. You'll get stunning views of the Jamison Valley and the waterfall.

From here, you can continue walking down to the Pool of Siloam. Or along the cliff to Olympian Rock lookout and Leura Cascades.

The walk starts at Gordon Falls picnic area, a great spot for kids to run off their energy.

To get there, follow Olympian Parade in Leura to its end. It's also accessible via the hop on hop off Blue Mountains Explorer Bus. The lookout is a short walk down the stairs from the carpark. 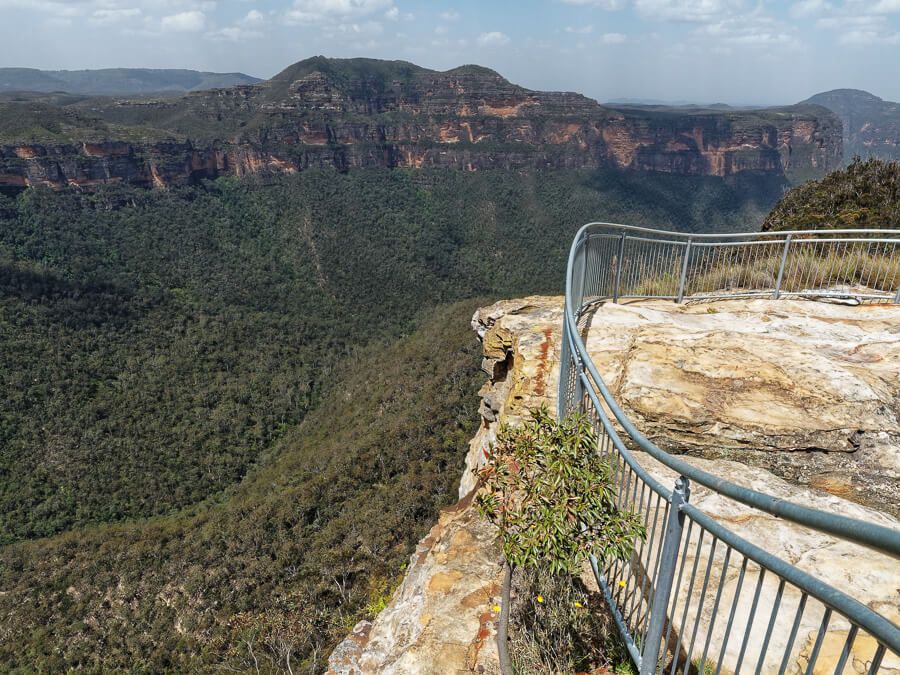 Get away from the crowds and visit Anvil Rock for a sweeping vista of the Grose Valley and mountains, including Mount Banks. You may even see Sydney CBD in the distance if you have good eyes.

The best time to visit is at sunset.

To get there, follow Hat Hill Rd in Blackheath, which becomes Perrys Lookdown Rd, an unsealed road. Keep left at the fork and drive to the small car park. It's a moderate 5-minute walk to the lookout.

It's also worth walking to the Wind Eroded Cave while you're there. 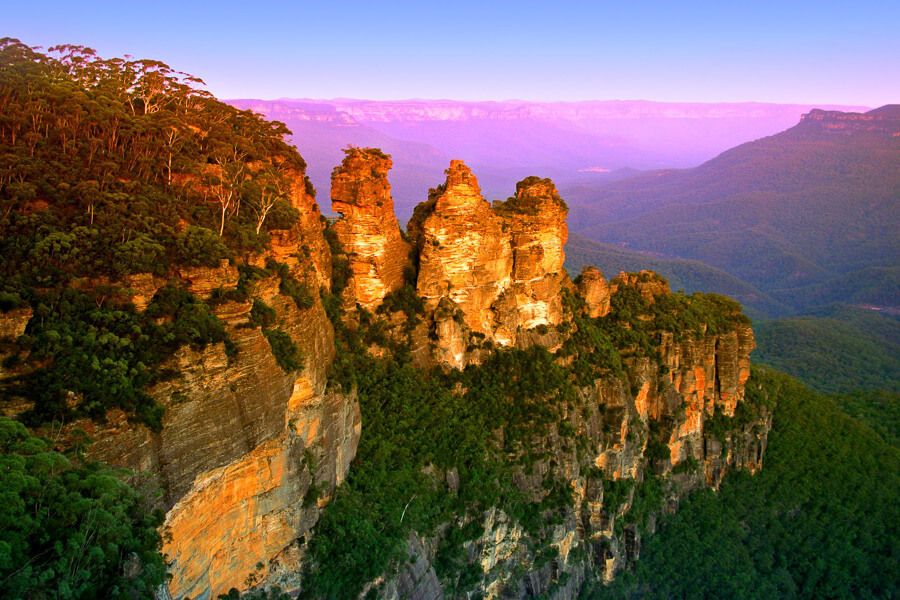 Echo Point is the most accessible and famous lookout to capture the spectacular views of the Three Sisters and Jamison Valley. The many touring coaches that come here daily attest to this lookout's popularity.

The views from Echo Point lookout are truly spectacular!

To get there, drive to corner Echo Point Road and Cliff Drive in Katoomba. Or alight at Katoomba Station and catch bus 686. Echo Point is also accessible via the hop on hop off Blue Mountains Explorer Bus. 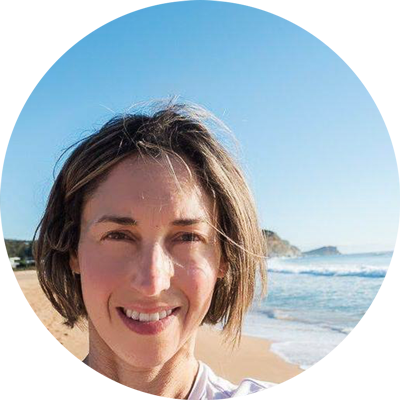